The cure for the Christmas party hangover

It’s 2.30 in the morning, you are on the way home from what has been the most AMAZING Christmas Party yet! You did intend to get the last tube home as the Christmas party is usually pretty dull. You started the evening, beer in hand, talking to Sandra from accounts (WHY do you always get stuck with her? Someone has to!) and then a miracle happened! Young Douglas, the new sprightly Marketing Executive bought you a jagerbomb (which he assured you is the best drink around these days). Curious as to what the fuss was about you decided you would have one……..

Five Jagerbombs later, you were on the dance floor feeling twenty-one again. The whole office loved your dance moves (or at least you thought they did) and you actually ended up telling Sandra in accounts that she was all you wanted for Christmas. 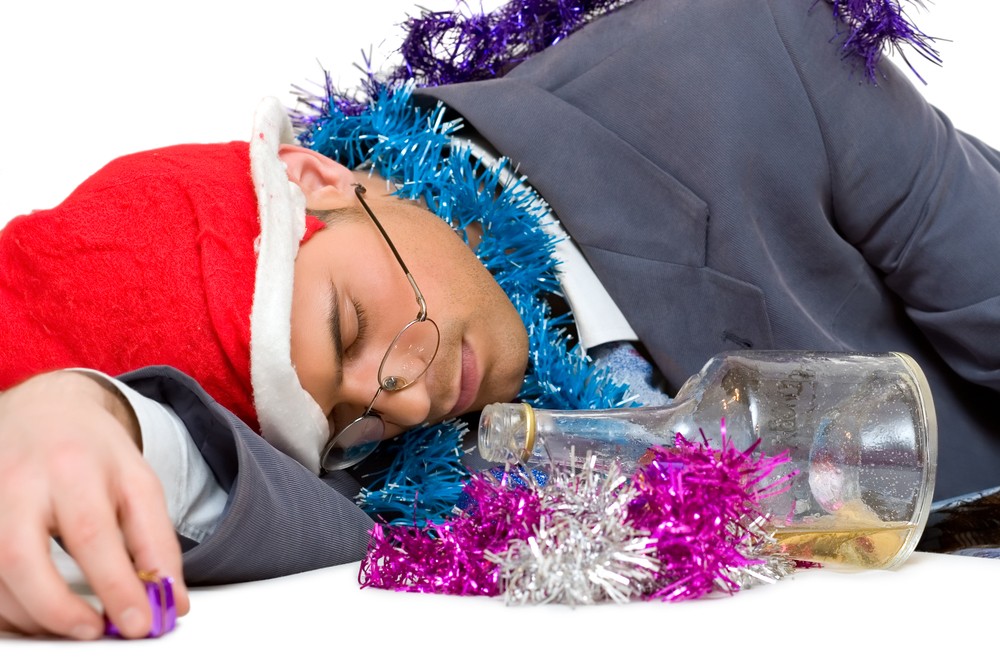 FAST FORWARD, it’s 7.53 AM, you stir in bed and feel like you may have been hit by a bus. You slept through your alarm, and realise you are fully clothed and yes it was the Christmas Party last night and this is why you feel like a corpse. How will you ever make it through the day?

We have come up with our top ten hangover cures to get you through the Christmas party hangover, it’s one of the worst hangover’s of the year and the day can be a real slog (especially when you run into Sandra from accounts, cringe! Do not worry though, Douglas thinks you are the bee’s knees). So let us know if our hangover cures can help you.

8am – Reach for the Ibruprofen

Everything hurts, it is the only way to begin this war against the hangover. The best news is you can take up to eight in twenty four hours and no we do not mean eight all at once. Read the packet.

Normally for sensible athletes, who need to hydrate at a rapid speed. However, energy drinks with electrolytes in will leave you feeling replenished. Lucozade sport orange is our favourite! Watch out Mo Farah.

9am – Hit the office and ignore the coffee

Not because of the dehydration (which is actually a myth), but because the caffeine will sort you out for an average of 1.5 hours and then you will have a mega crash! Get the water down you instead.

10am – Get the Berrocca down you

There is yet to be evidence that this really works, however the placebo effect may just work for you!

Don’t wallow at work, it’s not attractive, you got yourself in this mess. Try and keep yourself busy but with tasks that are perhaps not as taxing on the brain. Having a sense of achievement will boost those endorphins.

11.45am Lunchtime – Eat until your heart’s content now you can stomach it

Your body is craving the calories to repair itself. A hangover can make a lot of food taste bland, so get some flavour and pop out the office to the local Wagamama’s, Chipotle or Wahaca’s. Get the office involved, no need to suffer alone.

The ultimate ‘hair of the dog’. We obviously don’t encouraging drinking at work, however maybe you should go to the pub at lunch and get one of these. Douglas will come with you I am sure! The alcohol should help your liver function during a hangover apparently?!

2pm An afternoon pick me up – Sprite

According to Chinese Researchers, Sprite has been scientifically proven to help speed up the process of a hangover. They examined 57 beverages and this was the top dog. Take their word for it! http://www.huffingtonpost.co.uk/2013/10/09/sprite-hangover-cure_n_4071287.html

Not long to go now. You will be home in bed tonight, preaching that you will never drink again! (Until next week). Treat yourself to an afternoon brew.

You can’t sweat it out, that is indeed a myth. However, exercise will release endorphins which will boost your mood. Hit the gym, take a lot of water and by the time you get home you might just be on the road to recovery.

What are you top hangover cures?