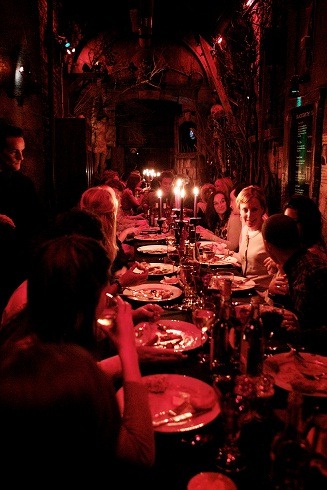 
Shooting in the Dark?

You may want to take a shot of the room where your party is or something that you know flash will ruin. You can try turning the flash off and doing the following:

You should find you get a nice shot without the flash. If you’re still getting the ‘camera shake’ symbol you could try pushing the ISO higher, you’ll get a grainy image but its probably better than using flash which may kill the ambiance.

TV mode or shutter priority is similar as above, but you set the shutter speed and the camera sets the rest. If you are shooting moving things then you’re basically telling the camera: ‘don’t drop below this shutter speed’. A good example of this is if you want to have the blur of a car going past the camera. Set a low shutter speed and moving objects will blur. If you want to freeze action – then go the other way; increase the speed. So if something is moving quickly and you want to capture it, with no blur, put up your shutter speed to something like 1/250 or higher. However – you’ll need more light, so the camera will make the hole bigger automatically and then you can adjust the ISO if you need to so you can get a decent shutter speed.

Don’t be afraid to use the scene modes. They are designed to mimic settings us pro photographers make on their cameras by our skill and knowledge. You probably have settings with little pictures on like ‘portrait’ or ‘sport’. What these do is tell the camera to give priority to different things. Don’t be afraid to experiment!

You can always delete images you don’t like; it’s not like the days of film. You can afford to shoot a few shots and then chose the best. Try not to delete shots on camera. The screen on the camera isn’t as good as your computer screen. There may be something in a shot you like which you won’t see if you delete it after you’ve taken it.

Above all – have fun. Don’t be scared to experiment. It’s all about capturing the moment.