Charcoal burgers in baps – it’s time for a barbecue!

You know that it’s summer when the smell of sizzling barbecues drifts over your garden fence.  Even if the food tastes like charcoal or is semi-raw, and the smoke stings your eyes, everyone loves cooking al fresco.  It’s also the perfect opportunity for ‘BBQ Dad’ and his cohorts to flex their culinary muscles.  As Rebecca Reid from the Metro writes  “It’s a chance to pretend to be a cave man, a way of reconnecting with all that manly hunter-gatherer power that gets sacrificed because you spend your days pushing papers around a desk rather than spearing a woolly mammoth.”

So who have we to thank for this great summer tradition? Roasting meat over a fire has been around since naked humans lived in caves.  Not only did smoking help to preserve meat (the smoke drove off flies) but dehydrated, smoked foods didn’t hold moisture which bacteria needed to enable it to grow.  Israeli scientists at University of Haifa uncovered evidence that early humans living in the area around Carmel, about 200,000 years ago were serious about barbecue.

Surprisingly it wasn’t an American invention – instead we’ve got the Spanish Empire to thank.  Spanish explorer Gonzalo Fernàndez De Oviedo y Valdeys travelled extensively in the Caribbean and Florida in the 1500s, and was the first to describe the wooden rack above the ground used by the natives for cooking (called ‘barbacoa’ by the Taino Indians in the Caribbean).  They also brought cattle on their ships – when the Spanish conquered the New World, roasting pigs became massively popular with Amerindians and settlers.

The Americans then put their culinary stamp on barbecues all over the country.  According to TIME, Memphis is renowned for pulled pork-shoulder in sweet tomato-based sauce, North Carolina smokes a whole hog in a vinegar-based sauce, Kansas City opts for ribs cooked in a dry rub, and Texans go for pulled-pork or brisket.  Because it doesn’t require expensive cuts of meat, barbecue became a dietary staple for impoverished Southern blacks, often cooked with fried okra and sweet potatoes.  As African Americans migrated from the rural South to Northern cities in the first half of the 20th century, they took their recipes with them. 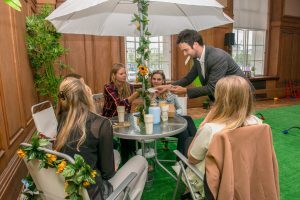 Back in Britain we’re slowly realising that a burnt burger in a soggy bap with a slap of ketchup isn’t quite the thing.  A recent survey commissioned by Simply Beef and Lamb revealed that 24% agreed that our barbecues are a national disgrace, with 20% admitting their barbecue skills are non-existent.  Perhaps we should spend a little more time in the planning – after all, putting frozen sausages on a fire that has only been alight for 5 minutes won’t give the best results.   Alternatively why not organise a Family Fun Day or BBQ themed event with us, and see how our experts, Food by Dish do it!