Halloween and Bonfire Night – celebrating horror and the macabre

Autumn might well be a season of mists and mellow fruitfulness as Keats observed, but it also marks the occasion of two of our biggest traditions, Halloween and Bonfire Night.

Halloween or All Hallows’ Eve is believed to have pagan roots and is linked to the Celtic festival of Samhain meaning ‘summer’s end’. It also marks the three-day observance of Allhallowtide which according to Wikipedia is when the church remembers the dead. In Britain the festival is growing in popularity with people dressing up in scary costumes to go trick-or-treating. This may come from the belief that supernatural beings or the souls of the dead roamed the earth at this time and needed to be appeased – presumably they all had sweet teeth! Italians use the festival to remember their loved ones and give children small presents from their deceased family members, whereas in Germany they hide all the knives to prevent harm coming to those spirits who return to the land of the living. The Polish visit and decorate family graves, and leave doors and windows open to welcome the spirits.

Why are we so enthralled with horror and the macabre? After all we’ve always been attracted to gruesome spectres from mass audiences at the gallows to oddities like bearded ladies in 19th circuses. It’s been suggested that voyeurism in something strange or repulsive can be thought-provoking and help us confront our fears. Is it human nature to celebrate another’s demise? Certainly it seems to be with the festival of that notorious terrorist Mr Guy Fawkes. According to Wikipedia, this dates back to the Gunpowder Plot of 1605, when the Catholic explosives expert was found with a heap of gunpowder in a cellar under the Houses of Parliament. To celebrate the ‘miraculous survival’ of King James I, people lit bonfires around London and the Observance of 5th November Act made it law to have a day of thanksgiving. In turn this became a focus for anti-Catholic sentiment with puritans preaching on the dangers of popery and people burning effigies of the pope. By the end of the 18th century children begged for money (hence “a penny for the guy”) with effigies of Guy Fawkes. 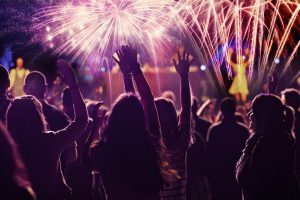 Nowadays we still light bonfires all over the UK often with a guy on top, and we hold firework displays representing the explosives that were never used by the plotters. The exception, according to the Telegraph, is Guy Fawkes’ former school of St Peter’s in York where they refuse to burn a guy out of respect for one of their own.

So enjoy the spectacle of fireworks but whilst you light your sparklers don’t forget that this festival is a precursor for the big daddy of all festivals – Christmas, in a few weeks’ time! Shortly followed by the biggest fireworks display of them all – New Years Eve! Both of which can be celebrated with Merlin Events.

Want to add some Halloween-style thrills to your next event? London Dungeon is perfect for spookily fun Parties and Dinners.