“I do…” Where would you like to take your wedding vows?

Gone are the days of popping to your local church to get hitched, followed by a pint, sandwiches and (slightly soggy) crisps at the village hall.  After the Marriage Act 1994 things changed, and civil marriages enjoyed the freedom to take part in other licensed venues.  As Bridal Guide reported;  ‘It’s all about a wedding that will blow your guests away and finding the perfect place which you can personalise to tell your unique story.’  But this comes with a price tag attached.

The average cost of a wedding in the UK is now £27,000 (£38,666 in London), according to new research by wedding planning website, Bridebook.  but head for the south east and you’ll find that 4% of weddings cost more than £100,000!  According to The Standard, the largest outlay tends to be venue hire, which now costs an average of £5,727 – so if you’re spending that much money, the expectation is for something pretty awesome.

If you are after stunning scenery try a lighthouse or a windmill.  Cley Windmill in Norfolk is a strictly bijou option, with a maximum capacity of 20 people for a ceremony.   Or a romantic beach wedding? Bournemouth Beach is the first beach in England and Wales able to host legal wedding ceremonies – opt for flip-flops instead of toe-pinching stilettos!  If you’re feeling flash with the cash why not get married on a glacier?  Forget silky lingerie, we’re talking thermals and crampons if you get married in Pearson’s Pond, Alaska.

For the adventure-seekers amongst you, how about the soft-adrenalin option?  Underground caverns and caves are increasingly popular.  Can you imagine getting Great-Aunt Beryl underground to Wookey Hole Caves?  Offering intimate weddings and larger ceremonies of up to 100 people plus amazing acoustics it’s certainly unique.  According to The Reader’s Digest, Hawai’i Volcanoes National Park, is probably the only park in the world where you can be married amidst the glow of a volcano.  Or what about the option of getting married with man-eating animals in San Diego?  Lions, Tigers & Bears is a non-profit exotic-animal sanctuary with a private retreat.  Bride Carissa Payan told Glamour that her guests loved the roar of the lions during the ceremony!

Perhaps quirky and unique is your style?  Edwardian Swimming Pool in Manchester has recently been renovated, and you don’t have to wear a swimming cap!  As Stylist magazine writes; “Sitting your guests in a swimming pool sounds slightly bonkers, but when it’s as fetching and, importantly, devoid of water as Victoria Baths, one is forgiven.”  When it comes to real quirkiness, few could beat getting married in a cemetery.  Bonaventure Cemetery, in Georgia (famous for “Midnight in the Garden of Good and Evil”) is a stunning and unusual place to get married – but thanks to the no-alcohol rule on the grounds you might want to move your reception elsewhere – and not in a hearse!

Once you’ve moved beyond the hotel function room there are plenty of locations to choose from – however according to Pinterest’s 2017 Wedding Report the tide is changing.  They’re seeing evidence that people are moving towards low-key casual celebrations that focus on the couple’s relationship and quality time with family and friends.  And for this, might we suggest the perfect way to start your life together is by getting married in your own private capsule on the Lastminute.com London Eye?  The sky’s the limit… https://www.londoneye.com/private-capsules/weddings/ 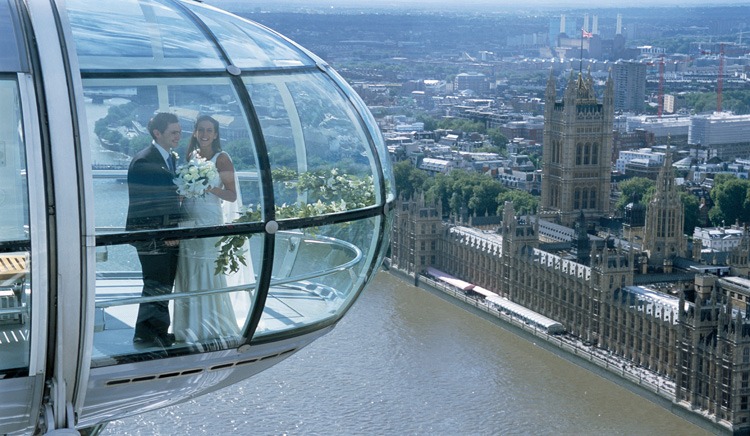