The sound of silence – sshh, it’s a silent disco!

It seems that the days of shouting to our mates over booming speakers are being replaced with something altogether more civil.  The quietest rage creeping across the dance floors is the silent disco.  But what has it got to offer, apart from not being hoarse after a night out?

Defined by Wikipedia as “an event where people dance to music listened to on wireless headphones”, silent disco involves music being broadcast via a radio transmitter with the signal being picked up by wireless headphone receivers worn by the participant.  Most events now feature three separate DJs broadcasting at the same time catering for different tastes.  The idea originally came from an obscure 1969 Finnish sci-fi film called Ruusujen aika (so says the Telegraph).  From then, according to InStyle the eco activists adopted them in the 90’s as a way of minimising sound pollution and getting around night curfews.  After that festival leaders like Glastonbury and Bonnaroo tried it out in 2005 and suddenly silent disco hit the mainstream, so much so that any self-respecting wedding will feature one (so granny can boogie to Cliff Richard whilst her grand-children get on down to Eminem!).

Not only does being wired for sound cater for different musical tastes at the same time, but the implications for the staff can make for a more pleasant working environment.  Instead of trying to decode orders being screamed at them, bar staff can actually hear what the customer wants!   As for door staff, many might relish a new role, that of ‘husher’ to reinforce the idea of quiet rather than breaking up noisy brawls, plus they can also enjoy the entertaining and rather unusual sight of people moving rhythmically and silently all over the dance floor.  However, silent discos provide a new challenge for DJ’s.  They’ve lost their captive audience as people switch channels at least every 30 seconds, so extended club mixes are out and an element of competition can exist with each DJ trying to keep people listening to their channel for longer.

As William Petz, founder of Quiet Events says “The people control the DJ—not the other way around.”  And when it comes to the sound, many find the experience totally more immersive, and get totally lost in music.  As Silent Storm Sound System explains “When the silent disco headphones are on, the sound is crisp and clear anywhere in the venue… guests can hear the music exactly how it is intended to be heard in true stereo sound regardless of your position in the audience.”

There are also benefits for those wanting to hold conversations without trying to shout above the din – simply slide one headphone off your ear and you can talk without resorting to mime language.  And people really seem to love it.  Time Out magazine’s comedy editor Tim Arthur told The Telegraph “It’s such an extraordinary thing to watch. It’s like a weird piece of performance art. It’s just the best fun and people absolutely love it. And it doesn’t have any issues of disturbing neighbours… It’s probably one of the most polite clubbing events you can have.”

So come on, feel the noise, don your glowing headphones and dance the night away (quietly) at our very own event SEALIFE silent disco.  Book your tickets from TimeOut. 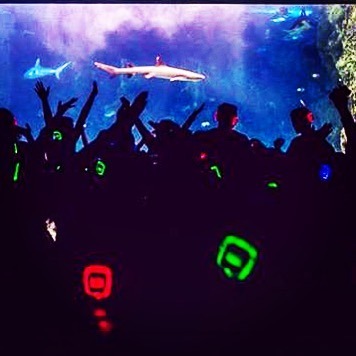